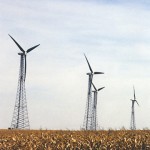 Clean wind energy is always in season, thanks to the revolutionary wind turbines that dot our countryside.  The windmills are approximately 26 stories tall, with blades as wide as the wingspan of a jumbo jet.  The towers weigh about 57 tons and each blade weighs about 8,000 pounds.

This is one of the largest “wind farms” in the world, and is constructed along the Buffalo Ridge.  The Buffalo Ridge is the most prominent topographic feature throughout the Midwestern prairie.  It stretches from South Dakota through Minnesota into Iowa.  Winds average 17 miles per hour here on the Buffalo Ridge, more than enough for the 8 mph that is needed to generate the wind power.  The 257 windmills serve approximately 71,000 households or 192,000 people in one year.  Each tower produces enough energy for approximately 747 people.

These windmills are a giant step in the direction of renewable energy.  It would take 301,000 tons of coal to make the same amount of electricity that these windmills generate.  The windmills off-set 3,400 railroad cars of coal in one year.  Isn’t that a breath of fresh air?